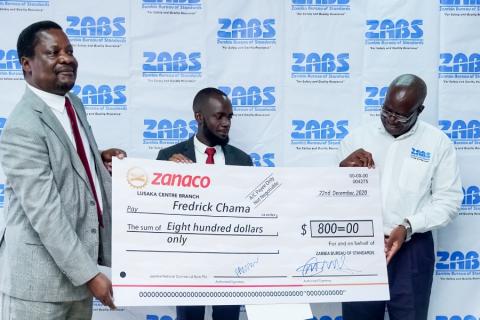 The University of Zambia (UNZA) 4th year student in the School of Education Fredrick Chama has has scooped the second prize in the African Organization for Standardization (ARSO) essay writing competition facilitated by the Zambia Bureau of Standards (ZABS). Mr. Chama’s essay and two others from UNZA were shortlisted and submitted as the top 3 essays to ARSO in May 2020 to compete with other essays from other countries within Africa.

Speaking during the prize award ceremony, ZABS Executive Director Mr. Manuel Mutale said his organization has come up with a deliberate programme to help young people understand the significance of standards and standardization of products. He said standards play a critical role in various aspects such as supporting innovation, facilitating trade, quality, safety, reliability and drives economic efficiency.

“This gives enough reason to incorporate standardization in the education programs of our colleges and universities. The students that we have today in our institutions of higher learning will be the professionals of the future and it is key that we begin to pass on knowledge at an early stage the impact and benefits of standards to markets and society,” he said.

Mr. Mutale said ZABS being the national standards body for Zambia, was looking at possible ways in which to involve universities and colleges in standards-related activities such as participating in the drafting of standards through the technical committees, research on standards-related topics and the introduction of the subject of standardization into the curriculum. He said the organization was eager to see academia providing invaluable contribution to the work of standards and standardization.

“As we award this prize this morning to Mr Fredrick Chama, I hope that many students will take a keen interest in the work of ZABS and actively participate in programs such as the essay writing competition that will help broaden knowledge and understanding in the area of standards,” he said.

Mr Mutale said out of the forty-six essays, Uganda emerged as overall winners with Zambia and Uganda in the second position. “Mr Fredrick Chama becomes the first Zambian student to win a prize at the ARSO essay competition at the continental level and he will walk away with USD 800 cash prize,” he said.

He said the essay competition was an annual event that takes place at the national, regional and continental level and seeks to create a platform for students to actively get involved in standards and standardization programs. “The essay writing focusses on different topical issues in line with standardization. The theme for this year was centred on “the role of Standardization in resolving and addressing the socio-economic issues for the Refugees, Returnees and Internally Displaced Persons and creating durable Solutions to Forced Displacement in Africa,” he said.

Mr. Mutale said that ZABS as the National Standards Body (NSB) for Zambia and member of African Organization for Standardization (ARSO), facilitates the participation of the country in various activities under ARSO one of which includes the essay writing competition for college and university students below the age of thirty-five (35).

And speaking on behalf of the University of Zambia Vice-Chancellor Prof Luke Mumba, Dean School of Education Dr Bentry Nkhata congratulated Mr Fredrick Chama for his achievement and for making UNZA and the nation proud. Dr Nkhata said scooping the second prize at continental level was a no mean achievement as it also helped to improve the status of UNZA at the continental level. Dr Nkhata further thanked ZABS for the initiative to engage the students in the essay writing and called for stronger collaboration between UNZA and ZABS in the students' engagement. “For us, this is a great achievement, only two months ago one of the leading research institutions ranked UNZA 18th in Africa, and today here we are talking about coming out second in the entire continent in essay writing. These successes are not spontaneous or one-off they simply define who we as UNZA,” he said.  Dr Nkhata said the achievements being recorded were as a result of commitment, dedication and unity of purpose that the university administration has put in place. “The university has had its share of challenges but we are glad that amidst all the problems, we have continued to record positive results, at national level and we are glad that we have continued to uphold our motto: Service and Excellence even at global level,” he said.

Meanwhile, Mr. Fredrick Chama thanked ZABS for the exposure and pledged to support would-be competitors in the next essay writing competition. He said scooping the second prize at continental level was an honour though what was more pleasing was the amount of knowledge gain during the competition process.  “I had very little knowledge about standards and standardization but after researching on the topic and writing an essay on it I feel I have gained a bit of knowledge which I can share with my peers. I also want to research on product standards and standardization, resource allowing, so that I can establish whether manufacturing companies understand what standards are,” he said. Mr Chama appealed for support so that he can help in sensitizing his fellow youth on the standards and standardization of products.