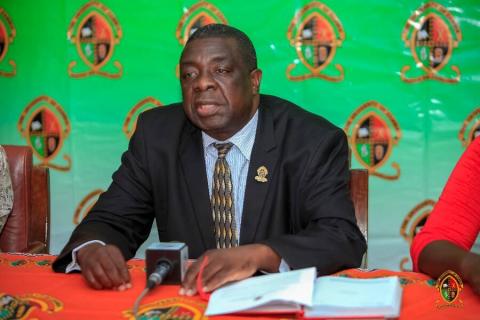 Announcing the development, the University of Zambia Acting Vice-Chancellor, Prof Boniface Namangala, said that the 2023 Times Higher Education (THE) World University Rankings included 1,799 universities from 104 countries and regions, making them the largest rankings in the year among the three known major rankings.

Prof Namangala said the ranking analysis was based on 13 calibrated performance indicators to measure an institution’s performance across the major four (4) areas namely; teaching, research, citations, and international outlook.

He said at the global level, UNZA ranked in the 501-600 position out of 1,799 participating universities, with an overall score of 39.3 to 42.0. He said despite the low score overall, the university did extremely well in citations with a 96.8 score. “This shows that despite having a small number of publications in SCOPUS, those indexed are highly used in research development,” he said.

Prof Namangala further said the actual scores for the four areas were 15.7 for teaching, 9.2 for research, 38.4 for industry income, and 49.8 for international outlook. “ This development points to the fact that there is a need for more UNZA research-affiliated indexed publications in the SCOPUS since this is the tool THE draws its research data from,” he said.

Prof Namangala said under research and citations, 121 million citations across over 15.5 million research publications were analysed, while survey responses from 40,000 scholars globally were received. “The University of Zambia was one of the institutions that entered the ranking for the first time. At the global level, UNZA’s participation was rated in the 501-600, beating several universities that have been in the ranking for some time with overall scores of 39.3 - 42.0,” he said.